The 8 pages below cover the key elements of my healthy atmosphere campaign and are written for reading in the order presented. 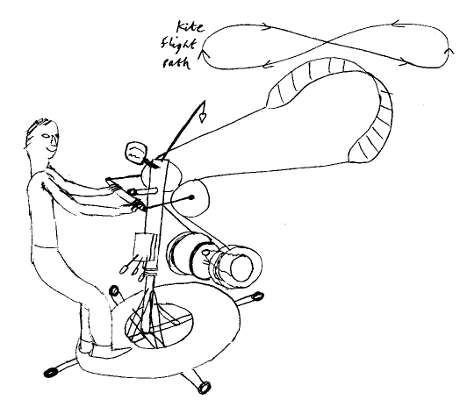 When a kite flies in the air nearly every part of it is under tension. Structures are far stronger when in tension than when they have to resist bending forces, like wind turbines do. Wind energy generation depends upon the area of sky from which energy is harvested. Kites, compared to turbines, can reach a far greater area of sky for a lower cost.

The potential for using kites to generate power from the wind is huge. Mounting kites on floating platforms out to sea is much easier than mounting turbines offshore. Also, the depth of the sea is far less critical. Yet another advantage is that kites can reach higher where the winds are stronger and more consistent. Finally, the projected cost of kite-based systems are lower because they use much less material. Together these strengths mean that kites have the potential to overtake all other forms of power generation and become our dominant source of energy - all without pollution.

What are we waiting for?

This proposal outlines a plan to help us get started with this exciting new technology.

There are many parts of the world where electricity is in such short supply that it would be viable to pay someone to fly a kite to generate it. The objective is to develop a system so simple that such places could afford the parts and then do much of the assembly themselves.

The diagrams above and below illustrate the operating principles. 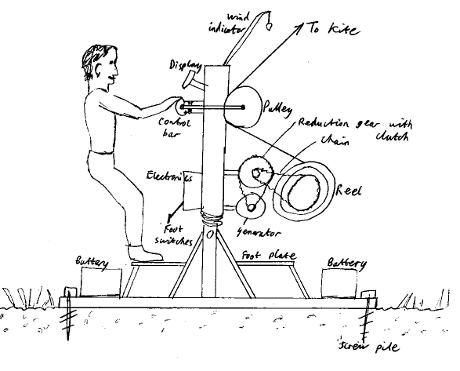 A "C" kite design is proposed and it is attached by 2 tethers to 2 rotating reels. The operater pulls on the tethers using pulleys attached to a control bar, and can make the kite fly figure of 8 motions in the sky. The kite's motion perpendicular to the wind direction allows it to collect far more energy than if it was stationary like a sail. The faster the kite moves, the harder it pulls on the tethers. The reels are attached to a generator so that as the tethers are pulled out power is generated. When the tethers are fully extended, one side of the kite is stalled while the other is given some slack. When the kite is in line with the wind and the tethers are no longer under tension they are rapidly rewound onto the reels before the kite has time to fall too far. When fully rewound the tether lengths are balanced again and the operator restarts the power generating motion through the air.

The control bar, reels, and generator are all mounted on a pivot so that the operator's back is always into the wind. The pivot is firmly anchored to the ground so that nothing moves as the wind pulls the kite.

When generating, both tethers will be the same length so both reels will be locked together with an electronic clutch and will drive a single generator. A detector on the reel with the shorter tether will detect when that tether is nearly fully unwound. The signal from this detector will simultaneously stall the generator and release the clutch. That means the reel with the short tether stops while the reel with the longer tether carries on unwinding. That will quickly depower the kite and as soon as that has happened the clutch will close again and the rewind process will be started. Rewind needs to happen much faster than the generation stroke so it is proposed to do this with a separate motor rather than by motoring the generator. The motor and generator will be attached to different reels.

There will be a second detector on the shorter tether, or on its reel, so that the rewind motor can be stopped at the correct point. When this point is reached the clutch will be released again and the generator stalled so that its reel (with the shorter tether) stops. The reel with the longer tether will be rewound further until its own detector indicates that it too is fully rewound. The clutch will be engaged and the next generation stroke can begin.

The operator will have some control over the electrics. For instance, to launch the kite it will be pulled out to a suitable position and then the rewind motor can be used to pull it into the air. There would also be a switch to retract the kite in case of a problem. Since both hands will have to be on the control bar at all times it is proposed that foot switches will be needed.

The machine will include a wind speed and direction indicating device so that the operator can see what direction to face and whether it is safe, or worthwhile,  to launch a kite. Since the kite will be one of the weaker elements in the whole machine it is probably sensible to have a range of kites for different wind conditions. The power in the wind is proportional to its speed cubed so there is an enormous variation and a single kite could not cope with all common conditions.

A rather unexpected advantage of this machine is that it can be used to generate electricity even when the wind is too slow, or too fast, for available kites. It will be possible to use humans or animals to pull on the tethers!

Collect together a group of volunteers  to push this plan forward
Create a dedicated website and keep it updated with progress reports
Turn the rough diagrams into technical drawings.
Collect the hardware together - generator, steel bars, kite materials etc.
Find a venue to assemble the parts.
Decide what sort of kite to make and sew it up.
Build the control electronics and wire everything up.
Fly the finished product.
Refine the design to get it market ready.
Start selling the kits. (That does say kits, not kites :-))

Thanks for visiting my website. If you are in the UK and ever want to buy anything from Amazon please come back to help support this work. By clicking on any of the Amazon links in this column and clicking through to the item you want, I will earn a small commission, but you will pay no extra. If something like an ad blocker stops you seeing the Amazon adverts this link should work.